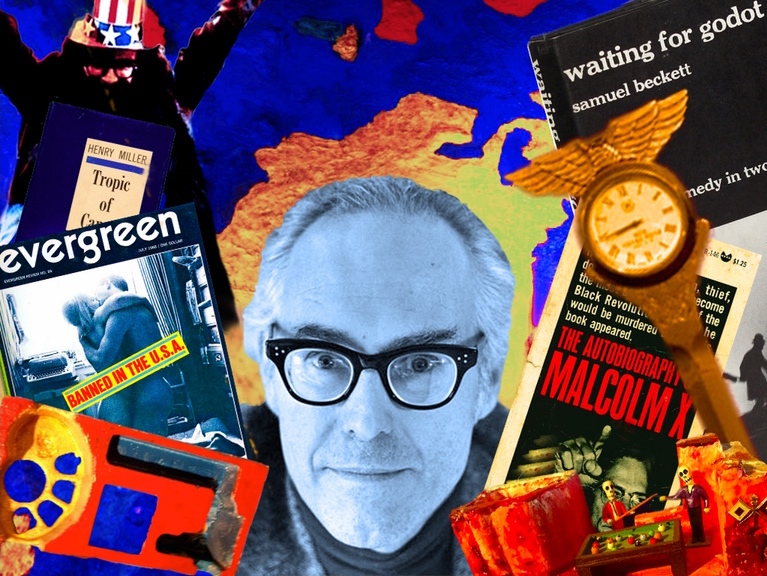 From the trailer for Barney’s Wall.

Longtime readers of the Review will recall our 1997 interview with Barney Rosset, the irrepressible publisher of Grove Press and the Evergreen Review. In the fifties and sixties, Rosset brought scores of ostensibly obscene books to the U.S., often to the gross offense of the era’s leading fuddy-duddies. The unexpurgated Lady Chatterley’s Lover? A Grove title. Tropic of Cancer—also Grove. American editions of Waiting for Godot, Our Lady of the Flowers, Naked Lunch, Last Exit to Brooklyn—all Rosset’s doing. Even I Am Curious (Yellow), everyone’s favorite X-rated Swedish art-house flick, was a Rosset import. As he says in his Art of Publishing interview, all this illicit material came with its share of trouble—some of which he sought out willingly. When he published Chatterley, for example, Rosset was so eager to strike a blow against censorship that he used the book as bait, getting himself hauled into court:

We decided the best thing to do was send the book through the mail so it would be seized by the post office. We thought this would be the best way to defend the book. The post office is a federal government agency, and if they arrest you, you go to the federal court. That way you don’t have to defend the book in some small town. If we won against the post office, then the federal government was declaring that this book was not objectionable. That was the idea, and it worked out in exactly that way. The post office has its own special court, where the judge and the prosecutor are the same man. We brought in all these famous writers. Malcolm Cowley was a witness. He was particularly good because he was deaf and couldn’t hear the questions of the prosecutor—so he gave a lecture. Alfred Kazin was another witness. Picked him up from the New School, where I’d taken a course with him. Horace Gregory. The judge, if you could call him that, ruled against us. We lost.

Too often, he found that it it took only a well-placed four-letter word to expose the hypocrisy behind conventional thinking:

We published a poem by Julian Beck that ended with the line, “Fuck the USA.” They wanted us to take the line out. We said, Would it be all right if it read “Fuck the Soviet Union”? They said sure—a very good example of what we were up against at the time. Probably if the poem said, “I don’t like the United States,” that would have been all right. “Fuck the Soviet Union” was all right. But to put the two together … ! We lost that printer. We kept losing printers, one after another.

Rosset was proud of his years as a firebrand. He bragged to the Review that the then-president of Random House “said I was a maverick … He was right.” Rosset died in 2012, but not before taking on one last maverick effort—his autobiography. He wasn’t going towrite the thing—too easy. Instead, inspired by a dream in which his first wife implored him to paint, he bought a bunch of art supplies, mounted a stepladder in his East Village loft, and undertook a twelve-by-fifteen-foot mural comprising scenes and mementoes from his life. Pictures of Thai bar girls. A Korean suicide knife. Figurines, a miniature billiards table. These he surrounded in swaths of gold and blue paint, giving them the look of a Wunderkammer in an aquarium.

No one was quite sure what to make of the wall, how to decode it. And anyway, whatwas it? An elaborate hieroglyph? An acid flashback? A last burst of unfettered expression from a man who’d spent decades fighting pissant censors and prudish bureaucrats? A new documentary, Barney’s Wall, aims to elucidate Rosset’s unlikely final project by using it to tell the story of his life. To this end, the filmmakers—led by Sandy Gotham Meehan, who (full disclosure) sits on The Paris Review’s board—have enlisted artists and even a shaman to “use the symbols, dioramas, and hints that Barney has embedded into his cry against mortality to piece together the influences that caused him to rebel against overreaching government authority.”

The documentary is nearing completion, but to help reach their goal, the filmmakers have created a Kickstarter to raise the necessary funds. If you can, please donate by Saturday, April 23. And, being advocates of Rosset’s brand of free expression, we encourage you to add whatever message you’d like: “Fuck the USA,” “Fuck the Soviet Union,” or “Fuck you.”