Time is running out to save a mural painted by literary trailblazer Barney Rosset on the living room wall of his East Village apartment. Best known as the provocative publisher of Grove Press who introduced U.S. readers to authors like Samuel Beckett and waged court battles to release books by D.H. Lawrence, Henry Miller and William Burroughs, Rosset lived on Fourth Avenue, between 9th and 10th Streets, with his wife Astrid Meyers Rosset for nearly 30 years. Now the building has been sold and his widow, along with a team of supporters, has until June 30 to raise funds to extract the living room wall. Once the mural, which is the subject of a forthcoming documentary, is removed, it will need to find a home. 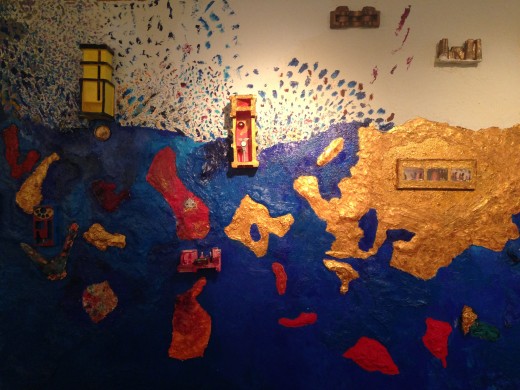 The fourth story walkup where Rosset lived is largely bare since Astrid Rosset, now in her mid-80s, moved into her small second home in East Hampton two weeks ago. What remains is characteristic of Rosset’s creative impulses — a patchwork of overlapping rugs cover the living room floor the kitchen cupboards are all painted different primary colors. “I told him he should have been a set director because every few months he’d rearrange the whole loft,” she said. Every once in a while he would even enlist the help of employees from the store where he purchased his pool table to change its position in the living room. “We got two big guys to come over and move it,” she recalled. “I think maybe he would change something and it wasn’t quite right. He was always trying to get the perfect look.”

Rosset began working on the mural, which consumed the last two years of his life, after his archives were acquired by Columbia and Syracuse University, leaving an empty void where the books used to be. With the help of an intern he and Astrid bought a ladder at a First Avenue hardware store and, starting smack in the middle, he began to fill the wall with fantastical, island-like shapes interspersed with detailed three-dimensional protrusions. His paintbrushes were always quickly ruined because they were never properly cleaned, so he stopped using expensive ones and switched to the cheapest sponge brushes he could find at Kmart. When he began having issues with his balance and could no longer use the ladder, he attached a brush to the end of a cane so he could reach the top of the wall.

Rosset would stay up all night working on the mural, often painting for four hours at a time without taking a break to eat or drink or do anything but focus on his the wall. It was never finished — he would repaint it over and over, using different colors until eventually it became a completely different painting. Rosset would decide which colors he wanted and Astrid, who could climb the apartment stairs more easily than her husband, would go buy the tubes of acrylic paint. Astrid took 300 photos that document the mural’s various incarnations over the years.
“It would get darker and darker and then lighter again,” she said of the wall. “At the end he didn’t quite finish it, but I don’t think he would ever be finished with it. Who knows what perfection is? Who knows when a story is done, or a painting?” Rosset worked on the mural for nearly two years and was still working on it up until the day he went into the hospital for surgery, where he died shortly thereafter.

Rami Shamir, the last author Rosset worked with, spent a lot of time with Rosset while he writing his book Train to Pokipse. “We had a very, very close relationship to the point where his kids considered me like a fifth kid,” Shamir said. Being so close to the family, he had a different perspective. “I was actually kind of annoyed by the wall,” he said, laughing. “I’d be like, ‘Can you help me out with this thing in the book,’ and he’d be like, ‘Let’s paint.’” Shamir said it took the enthusiasm of Sandy Gotham Meehan to make others see what she saw in the wall. “She had the privilege of having fresh eyes,” he said.

Meehan met Rosset in 2003 while directing a filmed interview with the influential editor for Checkerboard Films. “It was apparent that he would rather be behind the camera and had no interest being in front of it,” Meehan said. She learned Rosset was having trouble finishing his autobiography and realized that while he was a brilliant editor, writing wasn’t coming easily to him. She took it upon herself to help; her solution was to record him speaking, have the interview transcribed, and let Rosset edit his own words.

The autobiography was never finished, though last month OR Books announced that, along with bringing back Evergreen Review, it would publish the memoir in winter of 2016. While the book was a struggle, the mural took on a life of its own, becoming a kind of visual memoir. Various aspects of his life are portrayed among the paint and spackle, including a pool table with skeletons playing a round (Rosset was an expert player), and toy soldiers representing the time Rosset’s spent in Asia photographing Word War II. Astrid’s favorite is a pair of cufflinks that serve as the eyes for an abstract face. The wall is both specific to Rosset’s life and at the same time abstract enough to invite a wide range of interpretations.

Meehan decided the mural needed to be immortalized on film, and what began as a small project grew into plans for a feature-length documentary when Meehan starting inviting people to view the wall and witnessed how moved they were by it. “I realized there was a larger film here about the reaction of intensely creative, highly articulate people reacting to this work of Barney’s,” she said. She asked local artists, gallery owners and musicians and others to “riff” on the wall, and as you can see in the trailer posted above every response is unique. 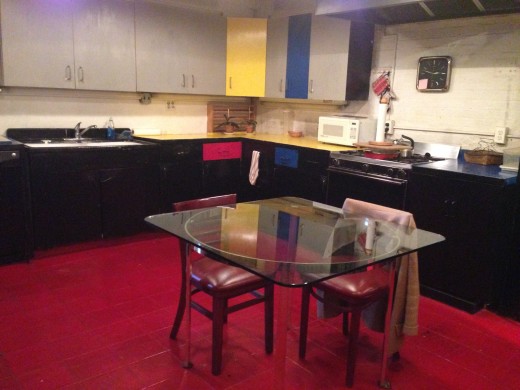 Meehan said no one has ever turned down an invitation to take part in the film, which she takes a testament to Rosset’s longstanding influence as a crusader for freedom of expression. Grove Press published cutting-edge authors such as Jean-Paul Sartre, Allen Ginsberg, Eugene Ionesco, Che Guevara, Malcolm X, Octavio Paz, Pablo Neruda, Jean Genet, Frantz Fanon, Alain Robbe-Grillet, and the Marquis de Sade, and his literary magazine Evergreen Review was a home for writing by controversial authors who had trouble getting published elsewhere.

Before Meehan ever met Rosset he had an impact on her. “When I was a teenager I learned that anything that had Grove Press on it at the time was an immediate entrée into all things that my parents were trying to keep me from knowing about,” Meehan said. “And then when I was in college Evergreen Review was read by all my classmates, so he was to me an iconic figure.” Rosset’s first wife was the abstract expressionist painter Joan Mitchell, who he was married to in the early 1950s. “He always hung around with artists,” said Meehan, who believes Rosset must have been influenced as an artist in this early part of his life.

As Astrid’s deadline for leaving the apartment approached, Meehan began thinking of ways to not only document the wall on film but possibly even rescue it from becoming abandoned property belonging to the landlord. She said the first company she went to gave her an estimate of $150,000 to $200,000 to cut the wall into movable sections and put it back together, a figure way out of the project’s league. Their methods would be appropriate for moving a very old, expensive piece of art, Meehan said, but because the wall is made out of very common modern materials a more traditional construction company would suffice, which would cost a much more doable $25,000. The wall would have to be cut into multiple vertical pieces and lowered out of the fourth story windows. If it does end up being removed, Astrid is also responsible for replacing the wall.

There’s also the question of where to put the giant painting. Meehan said there is the option to put it in storage for a time, but ideally it will find a home before the June 30 deadline. Suggestions have ranged from the Astor Place subway station (it turns out the MTA doesn’t take already completed art) to the Smithsonian, but Astrid says she hopes the wall can stay somewhere below 14th Street.

For her and others who knew the Rosset family, leaving the apartment represents the end of an era. “The last party that Astrid had at the loft was really a great goodbye to the way things had been,” said Shamir. “It was really a mixing of people from different social strata of New York,” which he said is indicative of the way Rosset eschewed the conventions of class and social standing that dictated the lives of his peers at other publishing houses. “Barney was about people, not a group of people,” he said. “He was just about everything that was great or kind of good or sexy.”

The film, which Meehan is working on with documentary filmmaker Williams Cole, will be released in 2016. “He wanted to leave something that people could interact with,” said Cole, “something that would cause people to think about what he did with his life, which was pushing against repression and authority and not ever giving up.”

The Barney’s Wall team is raising money and looking for people willing to donate their time and expertise in a variety of areas. Contact info@barneyswall.com for more information or visit the film’s website.