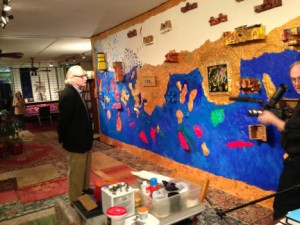 In 2010, Barney Rossett began to paint a 12’ x 15’ three dimensional mural on one wall of his East Village loft, an obsessive undertaking thought by many to be his visual autobiography. He was 88. Rosset had been the guiding force behind Grove Press, which he bought in 1951 shortly after its founding. As James Salter wrote in the Review in 2009, the press began publishing European avant-garde writers and political thinkers, Beckett among them. American literature, not uniquely, had for a long time been under moral constraints as exemplified by Dreiser’s realistic novel Sister Carrie being quickly withdrawn from circulation in 1900 by Doubleday when Mrs. Doubleday found it distasteful—the heroine lived in sin with a man and then repeated the offense. Books considered obscene could not be published in or brought into the United States. This included D.H. Lawrence’s Lady Chatterley’s Lover, written in 1928, privately printed in Florence, Italy, and banned in England and the US. Its theme, that the individual was fully realized only when both body and mind flourished, was not sensational but its sex scenes with their candor and the use of the forbidden word “fuck” kept the book underground.…

William Burroughs’s Naked Lunch in 1962, Jean Genet’s Our Lady of the Flowersin 1963, Hubert Selby’s Last Exit to Brooklyn in 1964, and in 1965 The Story of O—all these as well as others not published by Grove may be said to have contributed significantly to shaping the modern sensibility toward art and sex, not to mention the books Grove published by writers like Malcolm X, Frantz Fanon, and Régis Debray.

A new film, Barney’s Wall, documents Barney Rosset’s mural for posterity, and features the commentary of avant-garde writers, editors, artists, filmmakers, publishers, actors, musicians, and Rossett’s lifetime friends and family, all of whom were invited to view the mural after his death. A Kickstarter has been established to raise funds to complete the film.